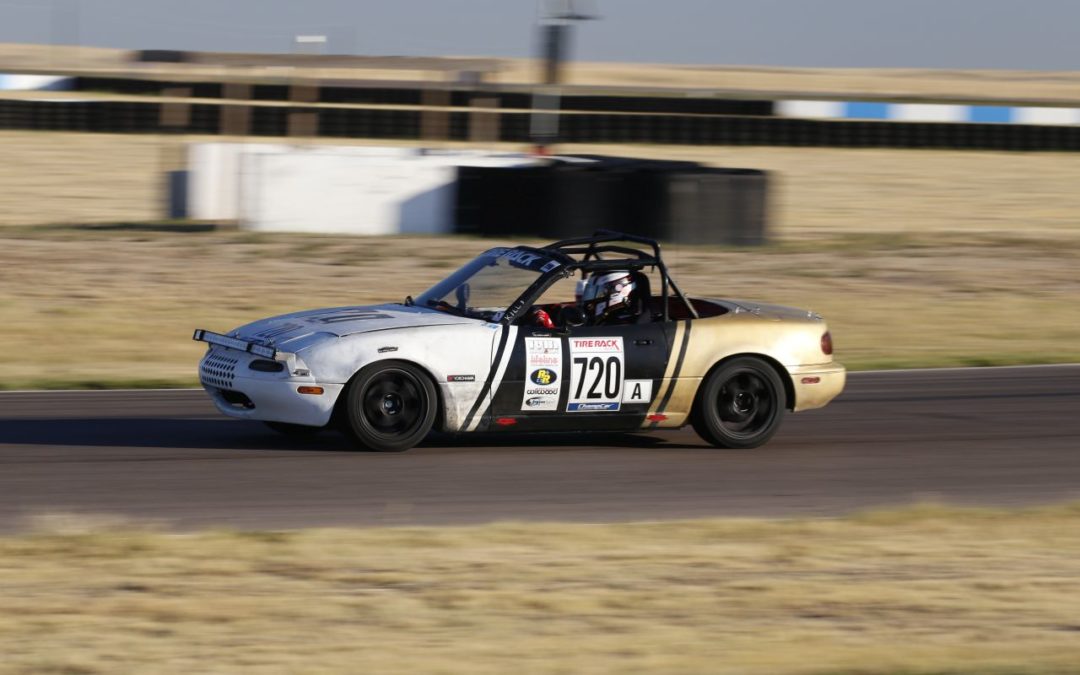 With social distancing restrictions beginning to ease up and sporting events under way again, the CU Boulder Racing Team’s Endurance Division headed to High Plains Raceway to compete in the High Plains Drifter, hosted by the 24 Hours of Lemons.

In the 24 Hours of Lemons, races range anywhere from fourteen to twenty-four hours straight in length. The winner is not who sets the fastest lap time, but who completes the most laps. The key to success is reliability. While many teams compete with only four to six drivers in their car, the CU Boulder Racing Team often takes multiple cars to events, allowing them to have an “A” car and a “B” car, intended to give drivers new to the sport an opportunity to get their feet wet without the added pressure of competing for a podium position.

After an almost ten-month break from on-track action due to the COVID-19 pandemic, the team was very excited to be back competing at their home venue. Roughly one-hour east of Denver, High Plains Raceway is a club-owned road course located in Deer Trail, Colorado. Built in 2008, High Plains has been the home track for the CU Boulder Racing Team since their founding in 2016. The team’s president, and CU Boulder senior, Behruz Rashidov says that being close allows the team to compete more often. “Having a track so close to our home base cuts down on our travel fees. We can do more testing and more races,” he says.

With a very tight turnaround from the start of the fall semester to race time, the team had to work quicker than ever to fully prepare for the race. Starting on August 31st, the team held their annual pre-race driver qualifications, in which any team member – students ranging from freshman to masters level – can try-out for a driver position. While many of the team’s selected drivers have prior racing experience, the team is always on the lookout for new talent, which is why they choose to hold qualifiers rather than using a different method to choose drivers. It gives everyone an equal opportunity to drive.

Arriving late Thursday night on Sept. 10, 2020, the team spent all day Friday doing final preparation work on the cars for their first ever full 24-hour straight race. After a full day of work and tech inspections, the team’s two Mazda Miata’s were ready for competition. With the cars ready, the team’s 12 drivers, ranging from first timers to experienced racers, met to discuss race strategy, track notes, and driving tips. First-time racer and sophomore Justin Fink said, “I was very nervous because I had never raced before. I was trying to go over all the corners, techniques, and strategies and stuff. I was very excited, especially when I first got in the car.” Adding to the excitement of the weekend, six of the team’s 12 drivers had never driven in a proper race before, having only qualified as drivers for the team the week prior.

In a 24-hour race, the key to winning is reliability, something the team has struggled with in their past races, including their last race at Sebring International Raceway in Sebring, Florida. At the half-way point of The High Plains Drifter, midnight, the team’s lead Miata was doing very well, lapping in third place overall, after an incident took out the leading car. On the other hand, the team’s second entry, car 303, was lapping farther back in the standings, focusing on driver experience rather than being competitive, in addition to facing cooling issues early on. With the communications in car 720 going silent at around one o’clock in the morning, second-time driver Edwin Clark-Silva battled darkness and compiling car problems until disaster struck at two o’clock.

In car 720, drivetrain problems left the car stranded on the back of the tow truck, effectively ending the car’s race and the team’s shot at a high-place finish. Clark-Silva, the driver in the car at the time, said, “I was coming down the hill at turn five and heard a loud bang, after that the car lost drive. It was still running but I couldn’t move it.” On the other side of the team’s garage, car 303 entered the pit no more than an hour later with more cooling issues. This time, the issues were fatal, ending the car’s race at 3 o’clock.

In an attempt to get at least one car across the finish line at the 24-hour mark, the team made the decision to combine the good of both cars into one when the motor overheated in car 303 and the rest of the drivetrain bad in 720, the team began the lengthy swap of car 303’s drivetrain into car 720. With roughly 15-minutes to go in the 24-hour-long race, car 720 headed back on track for three laps before finally being parked for the weekend, unable to take the checkered flag.

Despite the unfortunate outcome, the team came away from their first 24-hour race with many lessons learned, as well as lots more work to do before a potential podium finish. Rashidov summed up the weekend by saying, “It was going really well for the team, with both cars following their strategies very well until the middle of the night when both cars broke down.” With both cars needing plenty of work, the team is going to use this opportunity as a form of reset, with the plan of fully rebuilding car 303 in a new chassis, hopefully solving the chronic issues the team has had with the car. COVID complying, the team hopes to compete in three to four races in the Spring 2021 semester. One race is planned for New York at Watkins Glen in May, following by another at High Plains Raceway in June, and potentially Canadian Tire Motorsports Park in Bowmanville, Ontario at the end of July.